Halls Head College Education Support Centre is proud to announce that our wonderful Deputy Principal, Kate Sewell was selected as a finalist for the 2013 Women of Achievement award.

On Friday, 9th September, Kate was presented with a plaque by Sharyn O’Neil, the Director General, Department Of Education. Kate was nominated for the many contributions she has made as an outstanding educational leader in supporting staff, parents and students here at our school. Well done Kate!

Two Western Australian principals have taken out top honours at the National Excellence in Teaching Awards (NEITA) in Melbourne at the weekend.

The awards, which are divided into leadership, innovation and community engagement categories, aim to give communities the opportunity to formally thank inspirational educators and leaders.
Ms Fieldwick was the inaugural winner of the $2,000 Disabilities Inclusion Grant of $2,000 after being nominated by the school council.

Since the establishment of the Halls Head College ESC, Ms Fieldwick has fostered links between the community, advocated for joint projects between the ESC and the school, and established a local Coast Care group that works with the council to care for coastal environments.
ESC Deputy Principal Kate Sewell said that the staff were enormously proud of Ms Fieldwick’s achievements and considered the award to be the recognition that she deserves.

“Debbie supports flexibility and the need for change to be able to meet the individual needs of students,” Ms Sewell said.
“She empowers staff to be creative and to think outside the square in their teaching to engage students in their learning.”
Chad Sexton-Finck won the award for a primary principal in the category of community engagement.

The development of in-depth surveys allowed Mr Sexton-Finck to create a school environment to help every student achieve, and motivate his staff by linking their vision and personal interests to their professional innovation.

He also created state-of-the-art technology learning areas with interactive whiteboards and laptops and formed strong partnerships with many local businesses to aid in the school’s technological overhaul.

“This award signifies the great work done by all the highly motivated and enthusiastic staff at Redcliffe Primary School and I was very proud to receive it on their behalf,” Mr Sexton-Finck said. 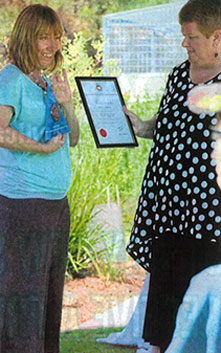 Selected from more than 1350 nominations nationally, principal of Halls Head College Education Support Centre Debbie Fieldwick has been awarded for the inspirational and empowering role she has played in the school community.

Ms Fieldwick was presented with the National Excellence in Teaching Award (NEiTA) on Monday by Department of Education regional director Margaret Collins.

“Debbie goes that extra mile to make sure every student has the best education possible at this education support centre.”
Nominated by the school council, Ms Fieldwick was one of only 60 teachers across Australia to receive the award.

Mr Terry O’Connell, Chairman of the NEiTA Foundation, said nominations by parent and school communities demonstrated the high regard and support the community has for the role of teaching.

“Each of the NEiTA 2012 ASG Inspirational Teaching State and Territory Award recipients brings a unique approach to their teaching role reflecting their personal interests, their community needs, and a level of inspirational teaching that touches the lives of students, parents, and their local communities daily,” Mr O’Connell said.

“Inspirational teachers have a profound effect not only on the future of our children, but also on the development of new teachers.”
Councillor and member of the Halls Head College council David Schumacher was present at the award presentation and described Ms Fieldwick as “an inspiration”.

“I think what Deb does and what the school does is phenomenal,” Mr Schumacher said.
“You can see it in the kids’ faces; she’s an inspiration in herself and a very special lady.”